Bright Blue Gorilla: Award-winning filmmakers and musicians, Robyn Rosenkrantz and Michael Glover, invite you to “Go with Le Flo”, a romantic comedy in German and French, shot in Berlin. “Go with Le Flo” will have its World Theatrical Premiere at The Downtown Independent in Los Angeles on April 11, 2014 – Opening weekend (April 11, 12 and 13)  with a live concert by Bright Blue Gorilla followed by Q&A reception.

“…a 21st century comedy that is tender, delightful, sincere, and, when we least expect it, uproariously funny, as it conjures up the spirits of Lubitsch, Wilder, and Sturges.”  Max Alvarez, New York ﬁlm historian and author

“Go with Le Flo”, 2013, color, 82 minutes, in German and French with English subtitles, unrated (most likely PG)- Florian is half-German, half-French and owns “Le Flo” – a French delicatessen in Berlin that specializes in salami. When he meets Camille, the daughter of a French director, it’s love at first sight. Florian is going to ask her to marry him but doesn’t know she’s already engaged to a movie star. Florian’s best friend, Jenny, is German and owns a bakery just down the street. She’s in love with him but doesn’t know how to tell him. “Go With Le Flo” explores what true love is, with plenty of twists and turns (some on a Vespa), and lots of salami!

Bright Blue Gorilla is all about taking chances. In 1990, Robyn Rosenkrantz and Michael Glover quit their L.A. jobs, sold everything they had (except their guitars), and bought one-way tickets to Europe. They landed a deal with Virgin Records then launched their own company, making CDs and touring the world. After acting & singing in the Matthew Broderick/Alec Baldwin movie, The Last Shot, Bright Blue Gorilla started writing-directing-producing their own feature films. With their do-it-yourself lifestyle, they booked the films into art house cinemas in Europe, doing concerts and screenings to support the release. 5 Feature Films, 11 CDs and over 3000 Concerts later, the husband-wife duo is still living outside the box, charming audiences around the world with their music & movies! 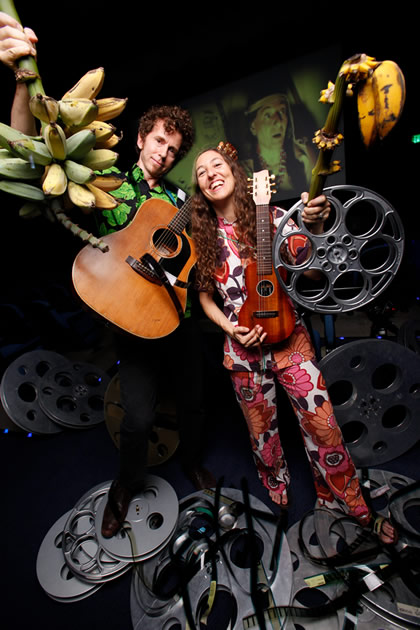 French American self-starter & lifelong learner aka for fun @veryinspiredpro (most of the time :), born in France and grew up in the U.S, married & mom to two young adults, Guylaine is the founder of French A L.A Carte Blog in the USA celebrating French lifestyle & culture, she is a blogger, author, and voice-over talent. View all posts by Guylaine S Gamble

French Culture & Lifestyle is alive and well in the USA! Guylaine Gamble is a French native who grew up in the United States and who loves sharing her French roots and way of life with others who also love the French culture. If you're new to French A L.ACarte Blog sign up for my Free French Lifestyle Guide!

In 1968 in France, there was a tv commercial for … END_OF_DOCUMENT_TOKEN_TO_BE_REPLACED